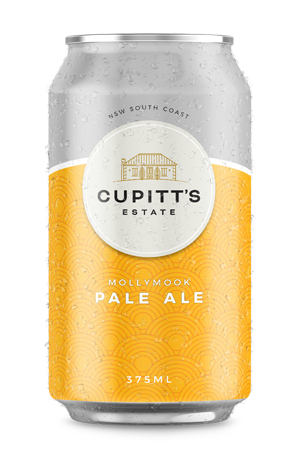 While lagers may make up the bulk of the nation’s beer consumption, within the “craft” or even “crafty” category there’s one style which is dominant: pale ale. And it’s not especially hard to understand why. They pack in loads of hop flavour, aren’t over the top in alcohol so you can knock back a few in a session and are basically just great to drink. And, importantly, they’re as friendly for newcomers to beer as they are appealing to the more advanced drinkers.

So, when your brewery is the younger sibling to a more well-known winery and restaurant you want to have a few go-to beers on hand to help pull in a different crowd. And you definitely want one of them to be a pale ale. Cupitt’s Pale Ale isn’t a bright and light one, but rather closer to amber or something from the darker end of the golden spectrum when the sun’s last rays are just about to dip over the horizon. It’s broadly an American interpretation, based on Cascade and Vic Secret hops which unfurl floral and citrus character while the malts offer a luscious base that rounds out with caramel sweetness.