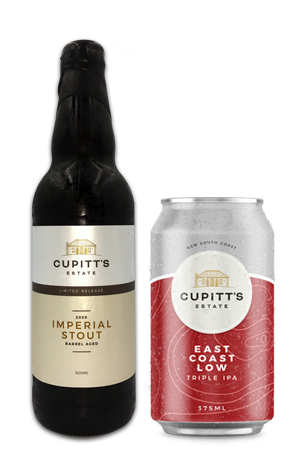 “I think I have to admit that I like big beers. I'd generally rather sit and sip on a big beer or two than smash a bunch of light and bright beers.”

So says Liam Jackson, head brewer at Cupitt’s Estate, after releasing another vintage of imperial stout (an entire two barrels’ worth this year) and a triple IPA.

This year’s version of the recently rebranded Cupitt’s Barrel Aged Imperial Stout is a big, slow, savoury number. When you stare into the impenetrable black of this lumbering beast, the aroma brings to mind mud cake coated with cocoa and the deep, almost fruity earthiness of an unlit cigar.

But while there’s a touch - just a whisper - of chocolate and dark fruit sweetness to be found in the smell, it vanishes upon first sip. Here, the bitterness of unprocessed cocoa and the seeping darkness that is molasses take over, allowing just the faintest notes of smooth toasted oak and light coconut to hover at the edges.

Meanwhile, even the imperial stout is dwarfed by the 11.1 percent ABV hulk that is East Coast Low.

Taking a whiff of East Coast Low is like being beaten with a pillowcase full of batteries and fresh hops, in the best possible way. If you’ve ever eaten a blood orange with the peel still on, finished an entire apple (core and all), bitten into a mango like you’re a wild animal, and had bourbon sprayed into your eyes, then you’ve got what it takes to drink this beer.

And yet, for all this complexity and intensity of flavour - not to mention the bitterness that creeps to a raging crescendo - this beer isn’t an indomitable monster. And Liam’s not sure how he feels about that.

“[To me,] a triple IPA is all about intense hop character - that is flavour, aroma and bitterness - rather than drinkability. While I still find it a compliment if someone remarks on how easily drinkable this triple IPA is - there's a part of me that hears that and thinks, ‘not bitter enough!’.”