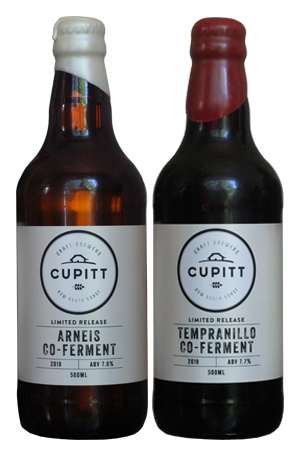 In 2018, Cupitt began a kind of internal cultural exchange, combining its winemaking and brewing arms to create a couple of co-fermented libations to the mysterious deities of wild and mixed fermentation. The results are sort of wine and sort of beer but not quite either.

One is the Arneis Co-Ferment. This was begun back in April by trucking in grapes from Orange to Ulladulla, where they were pressed in the Cupitt winery. A day into ferment the fruity mush was wheeled across to the brewery where it was plumped into a fairly neutral base ale recipe and topped up with a Belgian yeast that was left to feast. Several months on, the various components have threaded themselves together in something that’s perhaps initially perplexing but thereafter entirely pleasurable.

The aroma pairs pear character of the white arneis grape with distinct notes of the Belgian yeast, while the palate presents characters of cantaloupe on a foundation that, in terms of general sensation, doesn’t feel all too dissimilar to drinking a light wheat beer. It’s devoid of bitterness and, without that brash bully around to rough things up, the fruitiness is allowed out to play. That works well with a measured acidity and dry finish, helping create a kind of balance and lightness that defies a near eight percent ABV.

The companion piece is the Tempranillo Co-Ferment. The fruit, grown in the Hilltops region of NSW, was de-stemmed and the juice left to sit on grape skins where it did two things: (a) extract a deep red colour and (b) kick off wild fermentation from the natural yeasts found on the fruit. This fermenting grape must was next added to the wort, where it was left to carry on fermenting before, eventually, being packaged.

Where the Arneis has a distinctly “beery” feel to it, the Tempranillo edition plays more to its wine parentage, being replete with fruit and berry flavours of the red grape – think cherry, blackcurrant and raspberry. It also brings the characteristic tannin more to the fore, helping contribute towards an astringent and dry sensation. But its more robust, deep and full bodied character nevertheless retains an air of lightness and smoothness for a beer which, like its kin, weighs in a shade under eight percent ABV.

As the boundaries of beer are stretched ever wider it’s easy to foresee this kind of beer/wine fusion becoming more fashionable. Judging by these first two co-fermented efforts – never mind their privileged position of having both a winery and brewery at their Ulladulla home – it’s similarly easy to see Cupitt making more of a mark in this field.