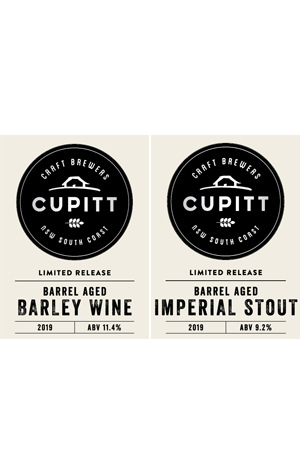 There’s great demand for barrels in the beer world, which means it’s not always easy for brewers to get their hands on them. An operation like Cupitt’s, which includes both a winery and a brewery, doesn’t have this issue.

Cupitt’s Imperial Stout has spent the better part of a year in a barrel that previously held shiraz, but the character imparted is less about the wine and more about the mellowing effects of the oak. From the beginning, a thick pour and dark brown head promise this will be a flavourful drop; it manages to serves up complexity without cloy. Cocoa on the nose sits beside cola and molasses, with the first sip bringing notes of chocolate and wood. These flavours lie on the tongue with languor, until they slowly give way to a hint of smooth tobacco burning in the back of your throat.

Stepping things up even further, head brewer Liam Jackson decided to add one of his favourite styles to Cupitt’s winter lineup - a Barrel Aged Barley Wine. Cupitt’s website compares the winery’s 2015 Le Gourmand Fortified Pinot Gris to spiced Christmas cake with dried fruit, but this description could just as easily apply to the brewery’s 11.4 percent ABV barleywine. It catches you up in booze-soaked figs and dried peaches, spices and vanilla custard, a glass of port with a few squares of rum raisin chocolate on the side. The flavours blend together seamlessly, leaving you with nostalgia of Christmas past and a warm chest into the future.