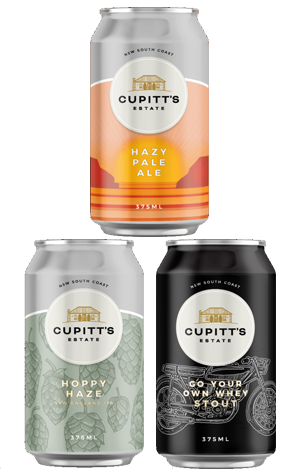 Brewer Liam Jackson isn’t one to rush, and that’s not a bad thing. “I think I'm in general a slow adopter to trends, and that includes hazies,” he says, "but now that we've brewed this beer, I see its place.”

The aptly named Hazy Pale Ale shines a pale yellow, and carries the light and bright flavours of a hazy pale while drinking with the ease of a lager. A tropical tang slowly welcomes in coconut fluffiness with just a blip of citrus.

But, while this is his first hazy pale, he’s been toying with New England IPAs for a few years now, making various iterations of Hoppy Haze. “We're not a ‘new hazy every week’ kind of brewery, so instead we play around with the hops a little from one batch to the next.” This batch features Idaho 7 and Sabro as the dominant hops, bringing big sweet orange juice and mango nectar vibes.

This is partly a compliment to Liam specifically, and partly to the Aussie beer scene in general… but this is a bangin’ hazy IPA, without any of the astringency that was all too common in hazies a few years ago. It’s soft and fluffy and fruity without any of that tannic feel, lifting right off the tongue when it's done.

Moving on from hops, Cupitt’s Go Your Own Whey Stout has now made it into cans for the first time. Cupitt’s Estate also makes cheese just a stone’s throw away from the brewery, producing whey as a by-product. This could (and often does) go to local pig farmers… or it could go into a stout. Unless you’re a pig, you’re probably happier about the latter.

With a light brown head as fat as an overstuffed mattress, the air above this beer is rich with roast and chocolate. A thick oil slick of dark chocolate in the mouth ends with slightly bitter dark roasted coffee beans, all held together with just enough sweetness from the lactose in the whey.

Also, now I’ve got Go Your Own Way in my head and I’m not even mad.