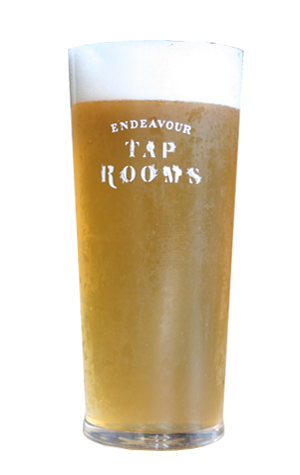 At the beginning of 2018, Endeavour’s head brewer JB went walking. He stepped out of the brewery, turned right towards Circular Quay, followed the path past the Opera House, around Bennelong Point and into Sydney’s Botanical Gardens. There, he found himself tagging along on a Bush Food Tour that revealed an abundance of native ingredients growing in the area. It inspired him to celebrate Australia Day by making Bush Tucker Brew, the brewery’s first beer made with indigenous ingredients. Fast forward six months or so and businesses around The Rocks were gearing up for a festival to celebrate all things of a native nature. JB figured this was a good chance to have another crack at brewing with the local flora, so created the Native Ale.

It’s a similar beer to the Bush Tucker Brew, but better because the team learned a lot from the first time: how to deal with the ingredients; when to add them; and in what quantities to best extract the flavours they were after. In this case they added lemon myrtle, finger lime and Davidson plum and it’s the citrusy characters that have come out most prominently, starting with a very fresh and spritely aroma that gets pushed up and out thanks to a high level of carbonation. That follows on the palate where the light malt and slightly creamy wheat base allows the finger lime to shine, creating a pleasant tingle that’s vaguely reminiscent of a fruit sour beer. To be clear, the Native Ale is not a sour beer but its lightness (the beer is an even 3 percent ABV) combined with the fragrant and full citrus character gives it that kind of general appeal.

Near enough to "normal" beer that it’s approachable to the everyman but with plenty of interesting flavours to pick apart if you fancy thinking about it, it’s easy to imagine Native Ale’s subtle showcase of indigenous ingredients has the kind of appeal that may demand a more regular spot in the brewery’s lineup.