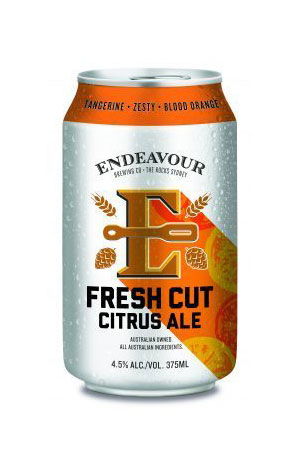 Olfaction carries a unique kind of nostalgic magic. None of our other senses are so quick to flash us back to a specific memory in the long distant past; voyages in grandma’s wardrobe, the torment of a childhood medicine, the school-era aroma of pencil shavings and a new eraser.

This was the ensuing train of thought having been poured a can of Endeavour’s new Citrus Pale Ale (since renamed Fresh Cut Citrus Pale Ale during summer 2019/20) to be met with an aroma not encountered for nigh on two decades: the smell of Fanta. It’s a rampant flourish of sweet smelling but non-specific citrus fruit, one that accompanied kids' birthday parties, afternoons eking out the maximum number of refills at self serve soda machines, days of candy and fun. Then it effectively dissolved upon the first sip, the palate reminding the nose that this is first, foremost and undeniably a beer.

Yes, there’s some sweetness to it but it’s not commensurate with the lavishly zesty aroma. There’s ample fruitiness from the hops and the citrus (blood orange and tangerine being their chosen avenue) but the bitterness and a little malt sweetness is on show too, helping hold the full force of the fruit at bay. Overall, it’s helped by a dryness that cuts off the threat of the saccharine and encourages you to unconsciously hurry towards the bottom of your glass.

There’s a reason why pale ales are popular and there’s a reason why citrus can work so well in hoppy beers, so there’s no reason to think Endeavour’s first nationwide canned release won’t win over a fair few fans at barbecues this summer.