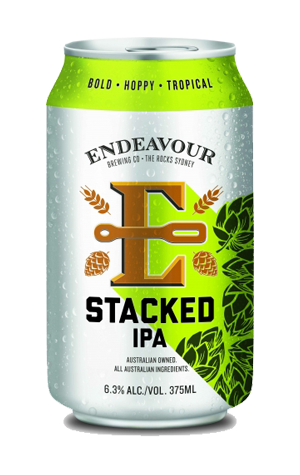 When Endeavour first found their Tap Rooms home in The Rocks, the first new beer to be brewed as a regular was the IPA. Space is a premium in the cosy brewery, and so the stainless steel tanks are stacked on top of each other. In tribute to this, the IPA became known as Stacked IPA.

Fast forward to the present, and Stacked IPA has been released in tinnies for the benefit of those who can’t make their way to the Endeavour’s charming venue in the historic Sydney suburb.

For a beer born in the midst of old brickwork, sandstone, and cobblestones, it’s managed to be quite a soft beer, giving a lean, smooth impression in the mouth. As with all things Endeavour, it features an all-Australian hop lineup: Galaxy, Aussie Cascade and Ella, then dry-hopped with a healthy dose of Vic Secret. A slight earthy resin hides in the cracks between the tropical sweetness and the citrus bite, with bitterness just starting to poke through. Of course, you need a strong sense of balance to stack one fermenter atop another, and here the brewers have looked to create balance via specialty malts that lend the beer a deep copper colour and a more prominent biscuit and caramel side than most IPAs around these days.