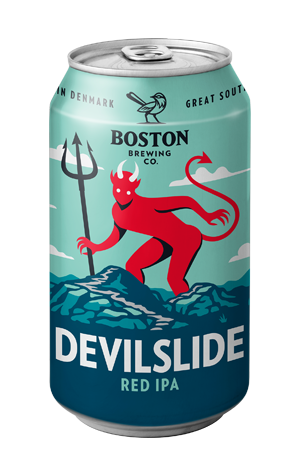 Such is the frequency with which new beers arrive at Crafty Towers, or new breweries open with beers that need tasting, it's rare to approach a glass without the need to make notes for future reference. Moments when beer is being supped almost absent-mindedly are few and far between, but there was a period at BrewCon 2018, between conference sessions and interviews, when the Crafty contingent was just wandering and chatting.

Spying some Boston cans on one of the exhibitor stands, I pointed at the one I didn't recognise and walked off with my sample, safe in the knowledge I didn't have to think about it too much as I'd be at the brewery a few weeks later. I got about eight metres and two sips away before returning.

"What is this beer? It's delicious!"

It was Devilslide, a red IPA that helped the brewery to its second consecutive packaging trophy in Perth in 2018. It's a fine example of packing plenty into a beer without making a mess, from the punchy hops that cover fruity, piney and berry territory to the balancing toffee malts. The body and intensity hint at Devilslide's size, but the way the beer is presented offers little inkling of the 70 IBU lying within the devilishly sneaky beast.