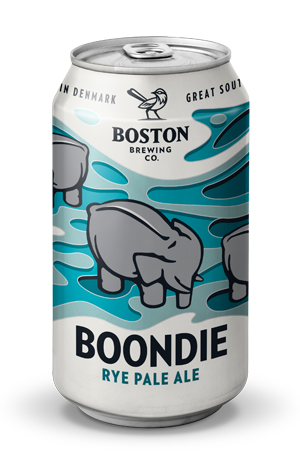 Of the beers that make up Boston's permanent canned offering, only one survives from the beers pouring on The Crafty Pint's first visit to the Denmark brewery. Back then, there was a rye pale ale, or Rye P.A., pouring; today, that beer has become Boondie, a beer decorated with elephants and named after a slang term for sand rocks.

It's a beer that's won favour with judges in the past, from the 2016 South West Craft Beer Festival to the 2018 Royal Adelaide Beer Awards, and which does by rather straightforward means; there's nothing crazy going on here, instead a copper coloured beer with floral, piney hops balanced by sweet and spicy malt aromas. There's layers of hop flavour to be unearthed amid the biscuity malts, all coming together into a tidy whole.