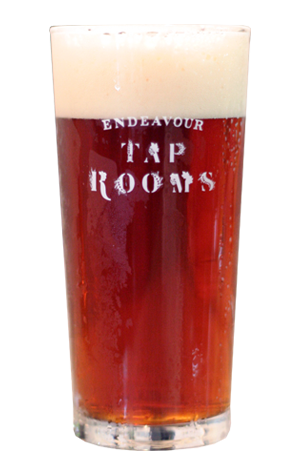 As he prepares to move on from the Endeavour Tap Rooms to pastures new, head brewer John “JB” Bogan is leaving a lineup of new beers that are a fair representation of the journey both he and the little brewery in The Rocks have been on in the past 18 months.

The first is a Kolsch, a beer that nestles comfortably in the realm of easy-drinking styles with which Endeavour first rose but whose early reputation is being slowly shed thanks to the brewpub releases. As with the Rauchbier and Altbier they put out this time last year, a German style was chosen to coincide with Oktoberfest and this year’s homage is something that would, given the opportunity, be suitable for downing by the stein. Being fermented with an ale yeast it’s got a fruitier aroma than your classic German lager but it sits squarely at that quaffable level. Combined with the fruity and earthy characters of the Ella and Helga hops, the subtlest hint of sweetness from the light malt base and a perfectly appropriate nibble of bitterness, this is an invitingly bright beer that’s clean, crisp and moreish.

The Red Rye IPA is a continuation of Endeavour’s budding relationships with the smaller producers and suppliers of the beer world. It makes this beer a collaboration of sorts, given the hop flowers were sent to them direct by fellow brewer Will Tatchell of Van Dieman Brewing who’d grown a blend of Cascade, Pride and Super Pride hops on his Tasmanian farm / beer estate. They’re not varieties Endeavour uses regularly – if at all – but sometimes ye work with the bounty ye receive. They then got in touch with the team at NSW maltster Voyager, with whom they’ve trialled malt before, and received a delivery of Triticale – a rye and wheat hybrid – to build the beer around. To that they added Cararye to boost the rye element and a couple of other malts to boost colour and sweetness. The result is a beer that’s resplendent in red, a blend of rye spice and earthiness that pair up with a resinous hop character before melding into berry fruits and malt sweetness.

Third on the roster is the Dessert Stout, a beer that traces its lineage to an epiphany beer of JB’s in the form of Southern Tier’s Crème Brûlée imperial stout. While that beer may have provided inspiration, Endeavour’s Dessert Stout isn’t a clone or copy, rather more representative of a launching point into the world of sweet milk stouts and the refinement of a recipe JB has been making at a home brew level over the years. It is, as he puts it, a “journey beer” and this is the first time he’s made it at a commercial scale. And it’s essentially what you’d want and expect from such a beer, a melange of dark malts, of caramel and fudge, chocolate and vanilla.

The mouthfeel benefits from being served on nitrogen while the finish is, perhaps surprisingly, not especially sweet and errs more towards that of a regular stout, showing coffee and roasted characters (pro tip: to get the most out of the malt character, order one at the same time as either/both the Kolsch and Rye IPA and let it warm up while you enjoy the others).

With a tap lineup featuring a faithful German classic, a local-focused collaborative effort and a journey beer – not to mention the recently released Native Ale – this is a range of which the departing brewer can be proud.