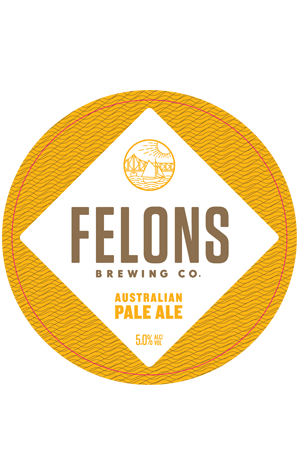 Head brewer Tom Champion has said that he’s “fiercely proud of the Australian beer industry, including the ingredients and suppliers that fuel our industry and move it forward”. It’s only natural, then, that at least one of Felons’ beers would be made from all Australian ingredients.

Pale, Vienna, Cara and Wheat from Barrett Burston Malting make up the grain bill, while Vic Secret and Galaxy bring a whole lot of fruity flavours to the table. The Australian Pale Ale’s naturally cloudy appearance hints at the juicy aromas and flavours it contains. Bold tropical notes waft from the top of this beer, with passionfruit, apricot and pineapple all making themselves known in the taste.

A tropical storm in a beer glass.