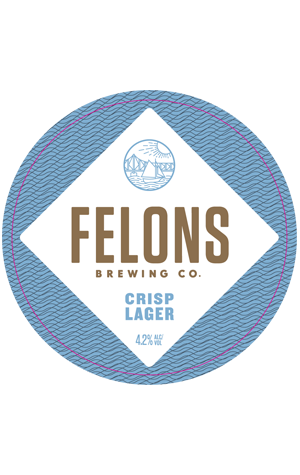 The Felons team have said from the beginning: “We want to get under the skin of Brisbane.” A crucial part of that was always going to be providing a solid lager – an alternative to the Four Letter Word coming out of Milton.

Their Crisp Lager’s styled on a Munich Helles, built on 100 percent Pilsner malt and featuring plenty of noble hops – but it isn’t bound to tradition; Felons have also added newer German hop varieties Mandarina Bavaria and Hüll Melon to the mix to bring their lager into the New World and add complexity. The expected cereal aromas are intertwined with subtle honeydew, rockmelon and lemongrass, all of which exude freshness. The extremely light colour and spritzy carbonation make it brighter than the sparkle on the Brisbane River on a Sunday afternoon. This all adds to this refreshment factor, giving this beer the ability to lift both your palate and your spirits as you drink. Each sip and each schooner ends with a beer living up to its name: crisp.