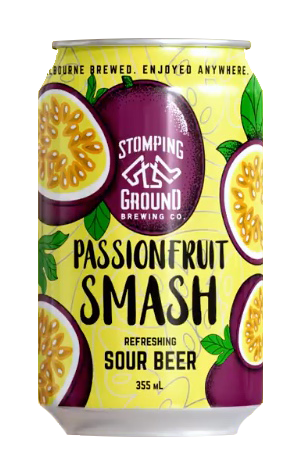 Stomping Ground’s Smash series has been smashing [That's it, you're fired, Ziebell – Editor] it out of the park since the Collingwood brewery sent tinnies of Watermelon into the world at the start of 2018. The colourful cans and impressively present watermelon flavour must have proved a popular choice for quenching a collective thirst at the end of summer, since a few months later it was followed by another, with Guava Smash putting an even more tropical fruit-heavy gose into the hands of drinkers.

The summer of 2019 saw the Smash twins become triplets with the addition of Passionfruit to the range, complete with bright yellow tinnies that manage to be even better at catching the eye than its predecessors. As for the flavours inside, the tartness matched against the sweetness and tang from the passionfruit make it one heck of a refreshing beer, one that brings two thoughts to mind at once: Passiona and summer music festivals.