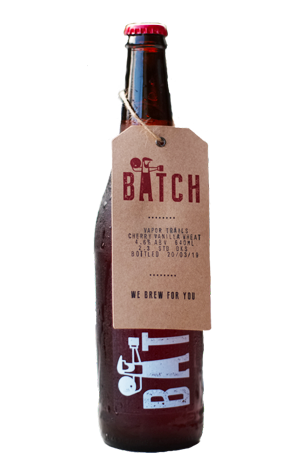 Batch’s Sydenham home has the dubious honour of being right underneath the final approach to Sydney Airport. As a consequence, conversation is often interrupted as a jumbo jet flies overhead, rumbling deeply and temporarily blocking out the sun, casting an eerie shadow over the brewery for just a second. At the same time, according to a popular conspiracy theory, the jet produces white condensation trails from its wingtips, secretly containing biological and chemical reagents to ensure the citizens of Sydney remain loyal to their government.

Presumably to honour this dubious phenomenon, Vapor Trails is a cherry and vanilla American wheat, brewed with whole sweet cherries and vanilla pods. The result is a smooth, light-bodied beer - thanks to the addition of flaked wheat - that pours a vibrant ruby red, with a beautifully pink head.

In both aroma and taste, the tartness of the cherries is perfectly balanced by the light sweetness of vanilla, resulting in a beer that tastes not unlike an unsweetened version of a pink lemonade float. The addition of lactose only adds to that analogy, leaving behind a silky finish and a burning desire for another sip. Or is that the influence of the vapor trails?