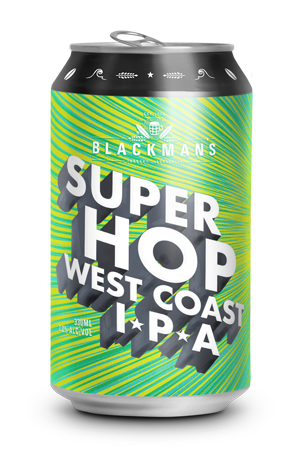 The latest chapter in Blackman's push of the "fresh is best" message when it comes to their hoppy beers has arrived in the shape of the Super Hop West Coast IPA. It's the first in a series of beers that will be released every two months under the "Same Day IPA" banner and will see kegs and cans delivered to partner venues in Victoria on the day they're packaged. In other words, the brewing team will head into the brewery in the early hours, fill kegs and cans, then enlist the support of the sales team and get them where they need to be within hours.

As for the debut beer in the series, it's a 7.2 percent ABV West Coast style IPA loaded with Centennial, Columbus, Simcoe and Amarillo. It also comes with a green-and-yellow costumed superhero on the cans, presumably in a nod to the superhuman efforts that have gone into its fresh delivery to drinkers.

The beer itself is a lean and mean as the can is green, with the hop combo delivering predominantly pineapple, citrus and piney characters and a little light malt sweetness there to balance the not insignificant bitterness.