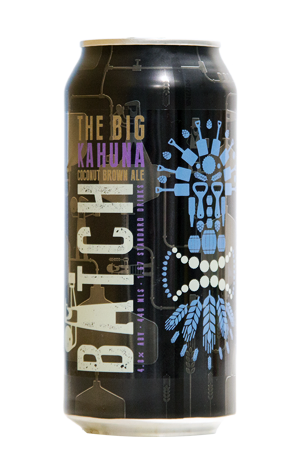 One of Batch’s earliest releases and now a regular winter seasonal, The Big Kahuna, returns for the year, making its way into cans for the very first time. Inspired by founders Chris and Andrew’s Hawaiian travels, this brown ale is packed with malty goodness from no less than six different malts. But, the real stunner is a massive addition of toasted coconut at all stages of the process – mash, boil and fermenter. That coconut carries through in all aspects of the beer too, from aroma and flavour to aftertaste and memory.

It’s a brown ale, so it’s not thick and heavy in the same way a stout might be, rather the body is refreshing and highly drinkable with undertones of caramel and chocolate. Despite the quantity of coconut, the balance is impeccable – after all, it has been brewed and refined several times over the past five years. It tastes exactly like Bounty in a glass, but avoids being cloying, overly sweet or heavy, rather giving a touch of Hawaiian summer to a cold Australian winter.

UPDATE: For the 2020 version, Batch have added more coconut to the recipe, as well as flaked oats and Vienna malt to boost the body.