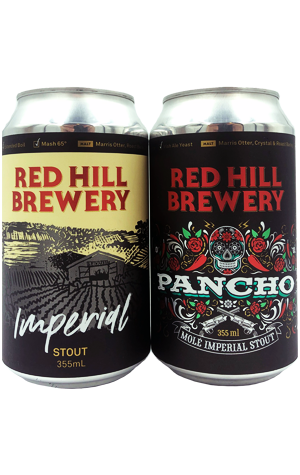 There's little left to be said about Red Hill's Imperial Stout. One of the originals in Australia and released annually for more than a decade, it delivers a wonderfully integrated blend of many of the elements you desire in such a beer: coffee, dark chocolate, caramel, dried fruits, earthiness and a hint of smokiness. There is something new in 2019, however: it's joining its stablemates in waving goodbye to bottles and hello to cans.

And that's not all. For their 2019 GABS entry, the Goldings decided to give the beer a twist – one inspired by Dave Golding's mole chili recipe. Thus, into the mix go Chipotle, Ancho and Guajillo chillies plus cinnamon and chocolate and out comes an "Aztec Mexican Stout" that's a distinct yet subtle companion piece to the original. The chillies add a deep, earthy, spicy perfume and a slow-building yet ultimately fairly prickly heat. Their impact is to make Pancho come across as lighter on the palate than the straight version, while, taken together with the drying impact of the cinnamon, the sweeter dark chocolate elements of the original seem somewhat restrained too.

For fans of the original, Pancho sits not a million miles away. For fans of chili beers, it delivers its goods with restraint, allowing you to savour his savoury characteristics without destroying your taste buds.