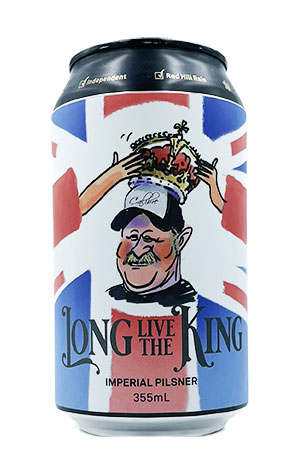 It's been a big few weeks for the collaborators behind this beer. Red Hill founders Karen and Dave Golding announced they were looking to sell the business almost 25 years after they started hatching a plan to open a brewery, and Dan Rickard (the caricature on the labels) is celebrating ten years since he launched his Calibre distribution business in Brisbane. Red Hill were his first Victorian clients and remain with him to this day, which has led to a suitably celebratory beer: an imperial pilsner titled Long Live The King.

Dave's intention was to combine the malt character of the brewery's pilsners with the hops from their Brut IPA and, given they have put out many a higher ABV beer over the years, ensure there was a fair bit of booze too. You're met by white wine vibes aplenty on the nose, and a body that’s as full as the 7.8 percent ABV suggests, yet still presentied with a slinkiness. The experience turns more herbal once the warmth and bitterness kick their way through the straw-tinged malt sweetness.

It's a fine commemoration of two fine businesses and their long friendship, and one that reminds me more than a little of the sadly-no-more Knappstein Reserve Lager – but on steroids.