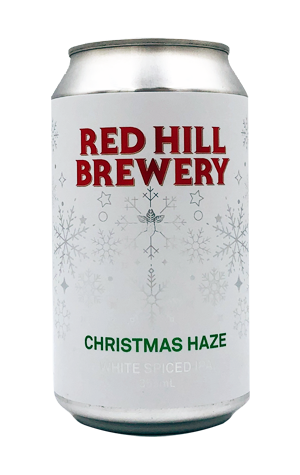 Red Hill have been releasing their Christmas Ale forever, at least in contemporary craft beer terms. Based upon the sort of festive beers you might come across in Belgium, it's big, rich and fruity – a tasty drop but not necessarily that suited for an Australian Christmas, at least not if you're planning on having more than one. Enter Christmas Haze.

It's another beer that looks to Belgium for inspiration, taking a pale and spicy witbier base, adding the sort of adjuncts typically added to such a beer – orange peel, coriander and cloves – but then giving it a twist in the shape of an IPA-sized dose of fruity hops. It's an approach they've taken before, albeit without the spices, and here it's one that has delivered one of the most beautiful beers I've ever poured into the glass: a pale golden haze like a Arctic snow drift with a head like the whitest of fluffy clouds.

Aromatically, those fruity hops are first to arrive, but leave your proboscis in there a while and the citrus peel follows, with the spices sitting in the background. On the palate, the hop bitterness combines with the Belgian yeast strain to cut through the initial sweetness with a potent dryness – let's call it the chill wind blowing across that Northern European winterscape for the sake of keeping that image going. The original Christmas Ale is out again too, so maybe grab them both and see whether you prefer your Christmas white or in fruitcake form.