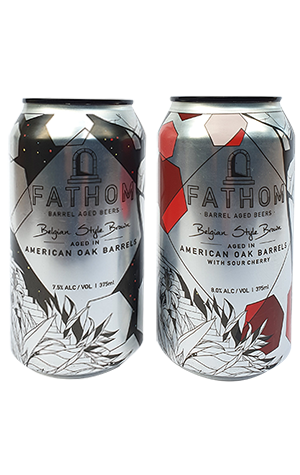 Fathom is Green Beacon’s barrel-aged and mixed fermentation program that the highly-awarded brewery started developing quietly a few years ago. The series is named for the nautical method of measuring depth, which feels like as good a statement of intent as any for a program dealing with beer’s more complex, wilder and funkier side.

Having started out selling the beers from their brewpub home in Brisbane, they've been making their way further afield since, with the lineup now embellished by a pair of Belgian style brown ales that spent 20 months in American oak before being blended back with different younger beers. For the unfruited Belgian Style Brown Ale, the lactobacillus provides a well-rounded sourness that keeps the 7.5 percent ABV sour in a particularly drinkable spot. There’s a sweetness from the malt, matched with some vinegar like acidity and a gripping mouthfeel, while flavours of dark fruit and oak dominate.

The Sour Cherry version is a little bigger at 8 percent ABV and, while it displays a similar flavour profile to its companion piece, it’s a little tarter, you'll also pick up cherry pit and almond.