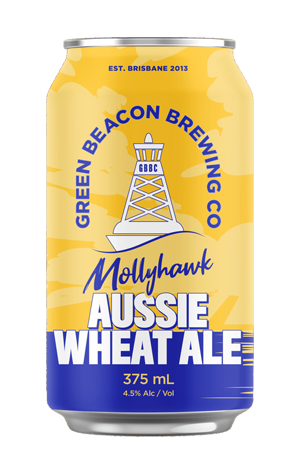 Either market research by CUB/Asahi (or Endeavour Group) has revealed there's an untapped desire in the local beer market for Aussie wheat ales or there's been a serious case of "great minds think alike" within the teams at a number of their craft brands. Matilda Bay, who let's not forget introduced many an Aussie to the concept of European wheat beers with Redback, released such a beer not long ago, and now there's two more from Green Beacon and Pirate Life respectively.

I'm pretty sure I'd have noticed their coincidental arrival anyway; the fact the samples arrived on the same TNT truck merely ensured it was hammered home. And if I'd still not drawn a line between the two, the yellow dominating both cans, not to mention the cursive fonts chosen for the beers' names, would surely have put the matter to rest. As an aside, stablemates Mountain Goat put out a draught-only wheat ale in March too (albeit with a focus on NZ rather than Aussie hops). Time to brace ourself for the winter of Aussie wheat ales?

Anyway, circumstances dealt with, what of the liquids? Well, certainly when it comes to Green Beacon and Pirate Life's offerings they're rather further apart than the 0.1 percent ABV and 20ml per can that separates them. The Brisbane brewers have experience when it comes to such beers – their Wayfarer (these days tagged a tropical pale ale rather than the wheat ale of yore) has long been a fine fruity session offering – and it shows with Mollyhawk. Paler, cloudy and with a bigger, foamy head when set alongside Pirate Life's Sunlit, wafts of soft, rounded citrus, mandarin and melon aromas kick things off. There's a juiciness within the delivery of the fruity hops, and a wheaty dryness to the finish. You'll find little bitterness but plenty of character for what’s presumably designed as a session beer.