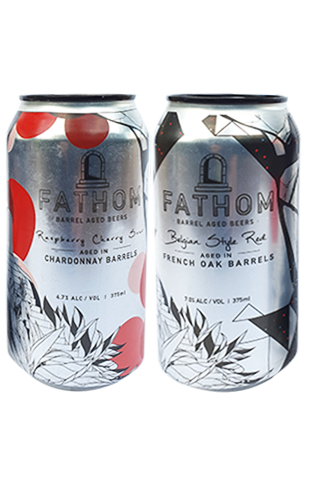 It may have taken many months of patient waiting for Green Beacon to launch their first Fathom beers but, as winter 2019 has passed, a growing number have been winging their way further from the brewery and into the hearts of many a beer lover.

The Raspberry and Cherry Sour picked up a fair few votes in our Best New Beers Of 2019 – So Far roundup (although not enough to be the Green Beacon representative in the final article) and is a mixed ferment affair made with lactobacillus and two different strains of brett that spent three months wiling away its time in chardonnay barrels. Pouring a vibrant and bright red, it’s a thirst-quencher that still possesses plenty of complexity. Tart, refreshing and slightly sweet but also delivering vinous undertones where the flavours of raspberry and cherry really stand out.

The Belgian Style Red is a far darker number, pouring an opaque, reddish brown, and spent a full two years sitting inside French oak. The beer’s sweet, malt driven body matches up with an acetic, gripping sourness, while the beer serves up a mixture of redcurrant, smokey and tannic characters too.