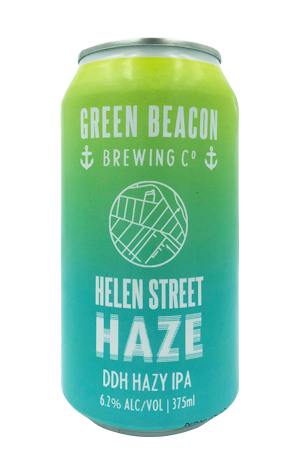 The Green Beacon brewers have been displaying a knack for knocking out IPAs in a range of styles and doing it well. There have been red, black, double, hazy and other variants in recent times and it's to the world of the haze they return once more with Helen Street Haze, named after their original Teneriffe home.

It's loaded up with tropical and citrusy hop varieties Galaxy, Azacca, Idaho 7 and Citra – in whole hop cone, pellet and cryo form – yet, to this olfactory system at least, it's predominantly lime that leads the way, leaping from the glass as if a shot of lime juice has been dropped in. The experience broadens on the palate, where it's softer and creamier than that initial hit might have you believe and a wider range of fruits comes into play. The carbonation adds a welcome prickle and the bitterness is, as you'd expect from Green Beacon, judged to make the beer as drinkable as you could hope for.