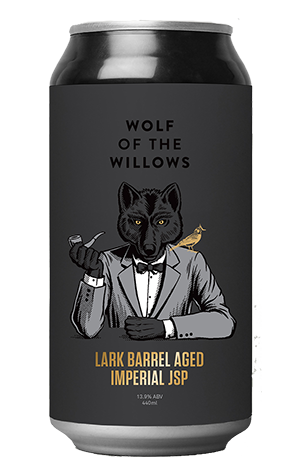 In 2018, Wolf of the Willows teamed up with Tasmania’s Lark Distillery to create a barrel-aged beer with a difference. The Cheltenham-based brewers headed to Tasmania, chose some barrels, had them shipped over as soon as they were emptied, then filled those barrels with an imperial version of their JSP (Johnny Smoked Porter). Once the whisky and oak had done their thing, the barrels were emptied, sent back to Lark and filled with a whisky to finish off the spirit. To find out more about the process, head here.

The collaborators have been at it again, albeit with some very minor tweaks: the 2019 version is a little bigger and it’s out in 440ml cans. What remains is the rather elegant pipe-smoking wolf on the front and many of the characteristics fans of last year’s release would have enjoyed. The impact of the peat does appear to be bigger than last year while lying beneath is a mix of vanilla, molasses, espresso and chocolate fudge; in other words, another decadent, whisky- and oak-infused dark beer.