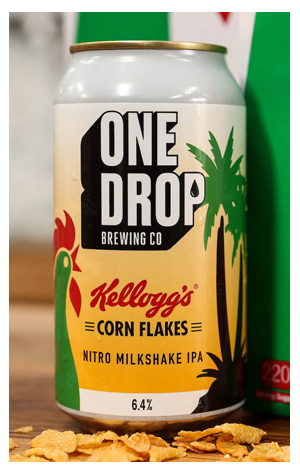 This is One Drop’s first IPA in a can, and first nitro beer in a can - significant milestones for a young brewery. It’s also their first collab - and what a collab! One Drop teamed up with Kellogg’s, who are also based in Botany, to make a beer loaded with cornflakes.

According to Bruno Madonna, director of research and technology at Kellogg: “We’ve always had a love of combining innovation with great tasting product at Kellogg. Kellogg’s Corn Flakes has been a catalyst to many amazing creations over the years so partnering with local Botany brewery, One Drop, seemed like a no brainer. This beer is a fun way to remind Aussies of the versatility of cereal.”

But this isn’t just a cornflakes beer. It’s a Cornflakes Nitro Milkshake IPA. And we need to be upfront about this: this beer is insane.

If you’ve ever complained that a beer is “too fruity” or “too sweet” or that “beer isn’t beer anymore”, just don’t even bother.

The nitro in this beer (with clear instructions on the can about how to activate it) ensures a full body and a thick white head. But that’s only part of it - it’s also dosed with strawberries, passionfruit, mango, and coconut, a hit of vanilla extract, and a boatload of lactose. The result? A faceful of sweet, creamy fruit. We’re talking coconut, super ripe strawberries, banana nectar (where’s that coming from?!), and pineapple sweetness. The Sabro, Citra and Simcoe hops add a touch of bitterness, but their main role seems to be to power along the fruity flavours, which linger in the mouth like best friends who come over for dinner and stay around talking til after 2am.

NB One Drop will be selling the beer in limited edition mixed 16-packs with their AIBA gold medal-winning Blueberry Sour, Botany Bay Lager and XPA.

And you can watch a video of the brew day and beer here.

If you're reading this in time, you can join them for the beer's launch on September 28.

Aside from on tap at the brewery, the only place to buy the beer is online here.