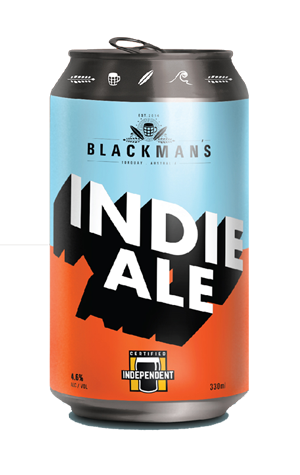 Australia's first Indie Beer Day – an initiative of the Independent Brewers Association – sees breweries, venues and beer lovers across the country unite to say #cheerstoindiebeer and put on all manner of celebrations in honour of the country's independent brewers. It also sees the launch of an actual Indie Ale, courtesy of Blackman's Brewery.

This is no repackaged beer rushed out to take advantage of the day, either. Rather, it's the brainchild of their main man-on-the-road about Victoria, Luke Denham, who has been pushing for a beer with which he can start a conversation. It was a desire to support independent, Australian businesses that first got him into craft beer and he feels that side of what "indie beer" means doesn't always cut through. What's more, when he's hosting tastings, he finds even Blackman's most approachable beers, such as the Mervyn Pale, can be too much for some drinkers who still view craft beer as something that's not for them. Yet, what if they understood that by buying Blackman's beers (or those of similar businesses) they were supporting local?

Thus the label asks: "What does indie beer mean to you?"

And answers: "To us, it means profits stay in Australia, it means more jobs per litre and means everything to Blackman's."

The beer inside is a simple Kolsch style beer: very pale, hazy, with a touch of stonefruity esters and the sort of lightly sweet malt and gentle, dry finish that ensures it slips down easy. In other words, nothing that's going to get in the way of the conversations Luke wants to start; new conversations he hopes will lead to new converts.

And good beer stockists where you find Blackman's beers