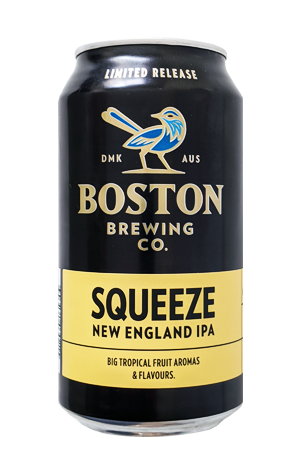 Boston’s Squeeze returns in cans, well timed for the transition into warmer weather. The Denmark brewer’s New England IPA has been appearing in limited release for more than a year and this release shows the strength of Squeeze's appeal, not the Great Southern team need convincing, as head brewer Tyson Addy notes: “It’s what the brewers drink most days after work.”

While not as visually dense as some, Amarillo, Azacca, Citra, Mosaic and El Dorado deliver bright tropical hop aromas which become bold Pasito vibes on the first sip. These shift through mango and fruity citrus with a perceived bitterness softer than labelled 38 IBU, making Squeeze a little sweet but a highly drinkable NEIPA, one which is likely to find a lot more fans when the brewery's Victoria Park venue opens over summer 2019/20.

Squeeze is available from the brewery and select WA retailers in limited release.