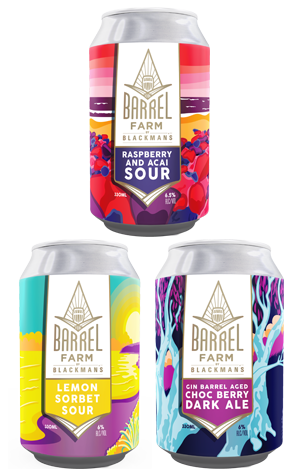 Since the latter part of 2019, Blackman's have been releasing a steady stream of sours under their Barrel Farm banner. Somehow, we never got around to writing about a couple of them upon release but with three now available and just one more to come we can at least play catch up...

They're pretty distinct too, with the Raspberry & Acai Sour reminiscent of a healthy brekkie bowl or a superfoods smoothie thanks to its somewhat gelatinous texture. Prior to hitting the palate, it opens with red berries, a gentle sourness and a lick of saltiness on the aroma, while it's the berries that linger once everything else has faded.

The second of the summer sours trio to be released is Lemon Sorbet Sour, a beer that pours with a darker hue (quelle surprise) than that whitest of sorbets and comes with a creamy roundedness and sweetness to the aroma that places it closer to lemon curd than sorbet. Again, the citrus character is a little broader and fatter on the palate, yet sprightly too, with Blackman's seemingly trademark gentle sourness and body-enhancing seawater completing the picture. Or so you might think – wrongly – as the lemon returns and lingers, almost cordial like, as if you're draining the last pool of sorbet from your cup.

As for the Gin Barrel Aged Choc Berry Dark Ale, it's not part of the summer sour series, more a standalone, and stand alone it certainly does: that "trademark gentle" element has been cast aside. You're first met by aromas of chocolate-coated Turkish Delight and everything is ramped up from there. The beer is a blend of a raspberry kettle sour and a porter aged six months in gin barrels and the latter dominates; there are hints of a meaty rauchbier, the bitter choc roast of a robust porter, a lick of leather and some sticky dates in the mix. The gin is present as a drying component more than anything while the belch test delivered cherry cola. A rather atypical release from the Torquay champs.