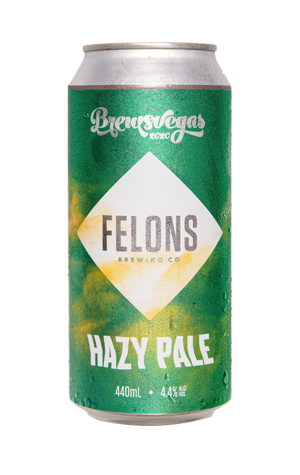 Brewsvegas launched in 2014 as Brisbane’s annual ten day celebration of all things good beer. It's a not-for-profit that relies on sponsorship and a ton of volunteer help and goodwill, with everyone involved a lover of beer, Brisbane, and the city’s beer community. Their annual collaboration brew partners are no exception, and in 2020 the official Brewsvegas beer has been created with Felons Brewing Co.

Felons have only been brewing beer under the Story Bridge in Brisbane for a little over a year and were keen to support Brewsvegas as well as the city that has embraced them and their philosophy: to produce approachable beers for their broad appeal venue. And it's fair to say Hazy Pale fits that bill nicely.

Brewed with fruity American Azacca and Ekuanot hops, Hazy Pale pours a lovely straw colour with a great haze and a good dose of citrus on the nose. That follows as you dive in, with orange and a little lemon, while mango, some light malt notes and a touch of grassiness also make themselves known. Towards the back, there’s some spiciness and pepper that linger a little, while it’s quite smooth and low in bitterness, with the spice creating a sense of it being a little drier on the finish than you might expect.

It makes for an easy-going beer, one ready and able to help Brisbane's beer lovers celebrate good beer throughout Brewsvegas.

Launching at Beers On The Lawn on Feb 22

Then available city-wide up to and throughout Brewsvegas