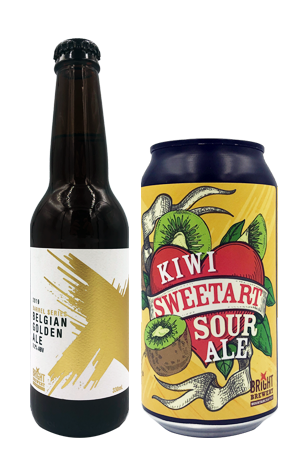 Strong Belgian style ales were once the sort of beer a brewery would have in their lineup – usually as a seasonal – as a radical point of difference, the sort of place occupied today by, say, a high ABV, fruit and lactose hazy double IPA. Despite the vast changes in the beer world and rapidly evolving tastes, strong Belgian styles are, if anything, less prevalent – at least in terms of a percentage of local beers on tap and in fridges – and more of a throwback option.

From their very earliest days, Bright have maintained at least one in their lineup, however, with their Fainters Dubbel continuing to pick up awards to this day. For autumn 2020, it's joined by another, with the shiraz barrel-aged Belgian Golden Ale one where they appear to have pushed the yeast to extract as much estery and phenolic character as possible, just about pulling the lever in time to prevent it creeping into varnish territory. There's a decent amount of sweetness – syrup sponge, honey, almonds and banana bread – to offer balance on that front, flashes of dark fruit (cherries were added late on) and a drying, herbal bitterness lying in wait too.

Their fruited sour ale series continues with Kiwi Sweetart, which is the most fruit cordial like to date in a run of beers that's always tended towards a fruit lolly sweetness. It presents with a distinct side order of lime accompanying the kiwifruit purée while its bracing side offers more of a tweak than a stranglehold. There's a hint of funk at play but really this is a lighthearted fruity number to knock back without troubling the grey matter.