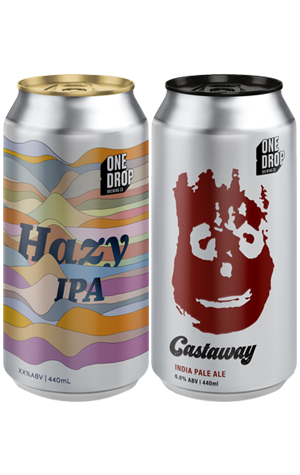 Late last year, One Drop released a New World IPA, and described it as being "brewed like a West Coast but hopped like an East Coast”. But, in the interest of doing isolation well, they’ve now separated the West Coast from the East Coast, making two beers from the one.

Their Hazy IPA is bursting with summer fruit hop notes, boasting pineapple, mango and stonefruit on the nose. But it’s the texture from the wheat and oats that really amps this one up - it’s like drinking a blanket fort reinforced with couch cushions. (If you haven't reacquainted yourself with the structural principles of blanket forts recently, I assure you it's only a matter of time.) Be warned, though - while it goes down easily, this smooth crooning brew sits at 7.2 percent ABV, with just enough warmth to remind you it’s a heavy hitter. Between that, the fruity characters and the Sabro hops, you’re having brandied peaches doused in coconut cream for dessert.

Then you have the Castaway IPA, a well-crafted West Coast that’s rounded and restrained. Several years ago, the idea that you could ever describe a West Coast IPA as “restrained” would be laughable, but today it speaks to the finesse the One Drop crew have brought to this well-balanced beer. It looks just like the amber from Jurassic Park (sans prehistoric mosquito, of course), and integrates those sappy flavours with some of the tropical and grapefruit peel flavours of Galaxy and Citra. The bitterness is present but largely keeps to itself, not unlike Wilson, the quiet friend on the label. Enjoy in solitude.