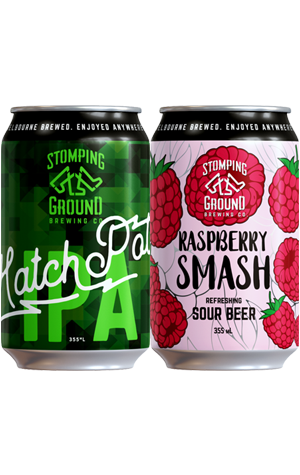 With both their Collingwood and Melbourne Airport brewpubs temporarily not pouring beer, Stomping Ground have supercharged their can release schedule, with five new tinnies coming out over as many weeks.

First up is Hatch Pot IPA, a beer that’s made regular appearances on the taps in Collingwood and largely draws its inspiration from the lean beers of America’s West Coast while featuring hops from the Pacific Northwest. It’s not hard to see why Hatch Pot remains a favourite at the brewpub: it’s led by big aromas of pine and resin, supported by undertones of grapefruit, while finishing incredibly dry and easy to drink.

It's joined by Raspberry Smash (also in the Carwyn Cellars Quarantinnies packs), which may well be the most fruit forward of all Stomping Ground Smashes to date. Pouring somewhere between crimson and pink, you're hit with a vibrant sweet berry character in an instant – it's so potent it's almost in cordial or jus territory. The "sour" of the title is a bit of a push; it's more a case of a light, cleansing edge than anything bracing, and certainly not enough to stop those sweet raspberries lingering on the palate.