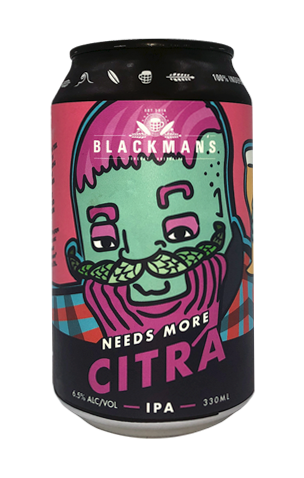 The Same Day IPA series sees the Blackman's team package a batch of IPA then deliver it to customers around Victoria on the same day so people can be enjoying hoppy goodness the same evening. For their first such beer of the COVID-19 era, that has meant a lot more deliveries straight to individual customers as well as retailers, a change up that has still seen the first batch disappear quickly with a second on the way.

Needs More Citra is also comfortably the most overtly hoppy of a series that's included the likes of the AIBA gold medal-winning Superhop and their fan favourite Angry Reg. The hop aroma is little short of explosive: dank as hell combined with the strained juice of a thousand citrus rinds, while the experience as it moves from lips to gullet is akin to consuming whole Citra hops (albeit without the plant matter and unpleasant bitterness that would deliver). It's the most potent and hoptastic of the Same Day IPAs to date and if you feel it needs more Citra you're less the bearded nerd on the can, more in need of an ear, nose and throat specialist.