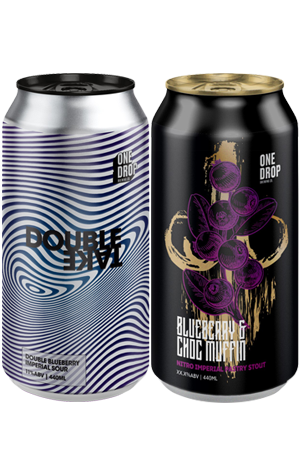 When it comes to breweries sharing their message with the people, traditional marketing will probably always have its place. But ask any brewery owner and they'll tell you about the immense value of their loyal followers - their "tribe" - when it comes to building a reputation. One Drop have been winning loyal followers left, right and centre, so for the social media launch of these two beers, they called on their tribe to do the heavy lifting. The brewery itself posted only a hashtag - #onedroprippleeffect - and asked their tribe to do the rest, creating a co-ordinated virtual launch.

The first beer, Double Take, is a double blueberry imperial sour, a souped-up version of One Drop’s AIBA gold medal-winning Blueberry Sour. Not only did they double the hops and double the ABV, but they looked at the already high proportion of fruit - 200g per litre - and cranked it up to a whopping 420g of blueberries per litre of beer. Apparently that's more than 264 blueberries in each can, but I wouldn’t want to be the person whose job it was to count them.

The resulting monster is all vivid colour and vibrant fruit. In the glass it looks like red wine topped with fairy floss, and at a distance smells a little like strawberry milk. But get your nose right in there and you're met with blueberry galore: blueberry pop tart aromas and blueberry jam in the mouth. A medium body carries a sweet balance that allows the sourness to push through, but the sourness isn’t the main feature. In case you hadn’t worked out what the main feature is - it's blueberries.

Blueberries must have been on sale at Woolies the week One Drop made these beers, because the little balls of superfood also star in the the second beer, Blueberry & Choc Muffin. Pour it out and see the creamy nitro foam take on the concrete-lavender colour of blueberry muffin batter, and try to tell me you didn't instantly get a desire to lick the mixing bowl.

The heady aroma carries the floral complexity of chocolate Turkish Delight, and the very first sip transitions into black forest dark chocolate. The berries are a little tart; the chocolate is deep and rich and slightly bitter; and the brown sugar sweetness and velvety vanilla bridge the two, giving neither the edge but still letting them shine. The range of flavours is unimaginable; this is what Aladdin was singing about in A Whole New World.

These really are beers worth talking about. #onedroprippleeffect