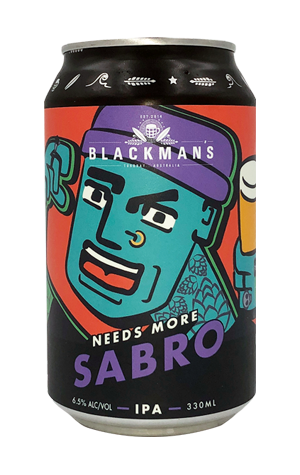 Current circumstances dictate that the only beers passing my lips of late are those arriving at the doors of Crafty Towers, most of which come in the form of samples or care packages. As such, my personal checklist for the year isn't as extensive as when regular interstate travel for festivals and to catch up with beer world friends old and new was a regular occurrence rather than a wistful pipe dream. Yet, even if I'd managed to sample every beer coming out of Aussie breweries in 2020, it would surely be tough to find a series as enjoyable as Blackman's Needs More...

It's not like it's a particular clever or out there concept: release a new IPA regularly that features one of the best hop varieties in the world. Written down like that you wonder why every brewery with a fondness for hops doesn't do it. But you still have to deliver on the brief and, having done the groundwork with beers like Reg and Super Hop over the years, Blackman's knew how to deliver.

Sabro, which brings another character from our shared graphic designer Jessie Jungalwalla to life, follows Citra and Simcoe and doesn't disappointment. While its Caribbean vibes shine through, the distinctive creamy coconut that's made it such a Marmite hop is a bit part player compared to the fruit salad, suggesting this cracker of an IPA might even be one to weaken the resolve of those in the "Hate Sabro" camp.