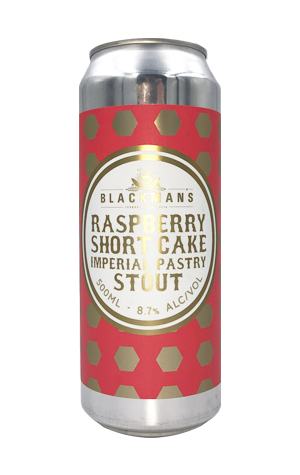 There's a good chance the first release in Blackman's imperial pastry stout series would have disappointed some pastry-chasers as, in a fashion typical of the Torquay brewers, it was far leaner and drier than the "Mudcake" of the title might have suggested. It made for a beer you could drink in a 500ml measure without suffering a seizure and a future dental bill running into the thousands, but didn't go overboard with the lashings of sticky sweetness some desire.

The follow up doesn't either, but Raspberry Shortcake Imperial Pastry Stout does step things up in the cake-iness department with the raspberries having a drizzled sauce quality to them and the chocolate coming across a little fatter and richer, aided by the use of vanilla (although not lactose). It's still far from flabby, more akin to a slice you'd order with your afternoon tea while visiting the Dandenongs – you might pass the fork to your companions, but you'd hog the lion's share for yourself.