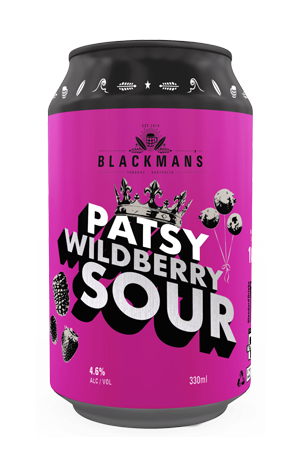 It's been a while since the original beer naming philosophy got a workout at Blackman's. Their initial core range all took names from co-founder and head brewer Renn Blackman's family members. And now it's time for great aunt Patsy to get a look in.

She comes dressed in bold deep pink attire and sees a sour make its way into the year round Blackman's lineup for the first time, following many a limited release and those under side label The Barrel Farm. Remove her attire and she's more rose blush rather than berry red with a softness to the raspberry and strawberry-derived aroma and flavour, like a sorbet with a dash of vanilla. Easy-going with a touch of salty, malty sweetness and little in the way of sourness to scare off session seeking newcomers, expect to see Patsy go down a treat on the Surf Coast over summer.