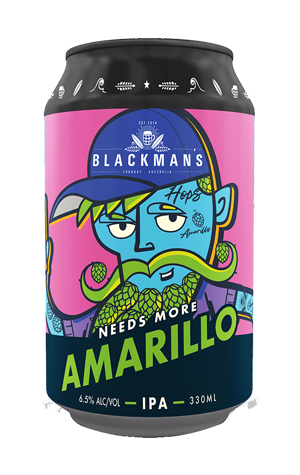 We quickly became big fans of Blackman's Needs More... IPA series in 2020, even plugging it as part of our end of year review for Victoria, so it feels like we've given the Torquay crew something to live up to. Clearly, they have every intention of doing so as they've already got three new versions of their hop showcase lined up for the early months of 2021 – we're putting on an event for Crafty Cabal members focusing on their hoppy beers in March too.

The new year's run kicks off with a hop variety that was a game-changer in its time, still appears in heaps of beers you'll have tried and loved, and yet doesn't perhaps hold the same cachet among newcomers to the world of craft beer as the likes of Mosaic, Galaxy, Sabro and that ilk. I've always found Amarillo to be one of the "narrower" of the big-hitting hops – in other words it delivers its citrusy payload in a tight, lean manner rather than smothering your olfactory system like Mosaic, or creating a cloud of fruitiness à la Galaxy. Given Renn Blackman is a master at creating lean, well-structured beers, you can guess where this is heading...

And it does, carrying out a focused assault on your senses that delivers lemon, lime and orange citrus plus a tight bitterness, letting you know there's plenty of hop action at play (it's triple dry-hopped with both T90 and Cryo forms of Amarillo for the trainspotters out there), but without going overboard.