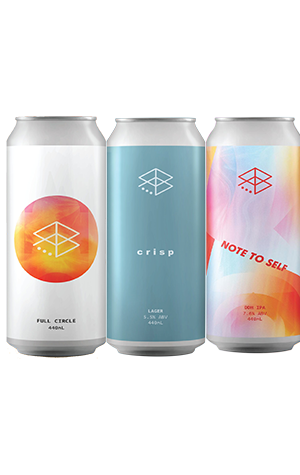 They don’t do things by halves at Range Brewing, releasing a trio of fresh beers at once on April 9. It's the second time they've brewed the pale ale Full Circle; a charity beer initially brewed in 2020 to support Melbourne hospitality workers impacted by the second wave of COVID lockdowns. Profits from number two are being donated to the Melanoma Institute Australia, after a close friend of the brewery was diagnosed with Stage Four Melanoma. Brewed with Galaxy, Australian Cascade, Vic Secret and Cascade, the hazy beer manages to be both incredibly pale and still golden enough to shine in the sun, while the tropical nature of the hops includes a mix of pineapple, paw paw, passionfruit and orange.

From hazy to perfectly clear, Crisp is an ever-evolving lager now in its tenth iteration at the time of writing. Using a traditional Czech yeast strain, Crisp's hop flavour is driven by a floral bouquet with the slightest touch of lemon. The malts contribute a well-rounded body of biscuit that soon disappears in favour of a bitter and dry finish which ensures Crisp provides the kind of quaffability its name suggests.

Finally, there’s Note To Self, a DDH IPA that uses Mosaic Cryo, Citra and Centennial to conjure a mix of papaya, pineapple, tangerine and guava. Pouring completely opaque and pale yellow, Note To Self has only a hint of bitterness and the sort of soft, luscious mouthfeel to make it the kind of hoppy and hazy number to which the mind should wander whenever anyone says the word Range.