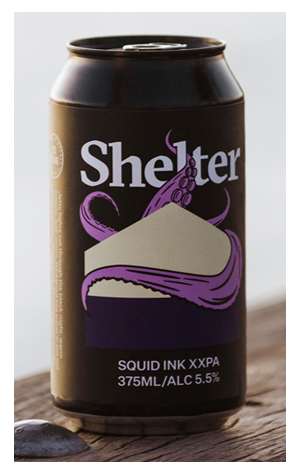 Shelter opened on the idyllic Busselton Foreshore to much fanfare in November 2020 and, since then, the beers have been flowing steadily for the masses who visit not just for the beers, but also the picturesque views and food on offer at the impressive brewpub.

It was only a matter of time before punters could indulge in a limited release from the creative brewing team, who chose to mark their first in spectacular fashion with a squid ink-infused XXPA.

The inspiration for a squid ink laced beer is built around Shelter sharing its front yard with the iconic Busselton Jetty, which isn't just ideal for long walks (or a distance benchmark for keen swimmers), but is famously a great spot for fishing, with squid in abundance, getting hooked on the reg by keen fishermen. Shelter’s relationship with the Jetty and the surrounding foreshore is important, and unique, so an ode to that relationship via a beer featuring squid ink is not only relevant and fun, but a great way to grab the attention of punters.

Grabbing the attention of punters aside, Shelter's Squid Ink XXPA also fares well on the palate. Pouring a slightly hazed ruby hue with a lacy white head, notes of citrus, grapefruit and pine billow out of the glass. Squid Ink seems to play second fiddle to hops in this clean and refreshing ale with just a touch of salty character present on the nose, reminiscent of beachside sea spray. On tasting, an umami character is present upfront but is quickly overridden by fresh citrus and pine, bolstered by a gentle malt character and a moreish savouriness. A lasting but integrated bitterness is carried by a fine, champagne-like carbonation that finishes long and full of flavour.

Shelter have all of the tools needed to create delicious beers and here they’ve demonstrated an ability to brew such beers with a striking, creative edge. Although brewed for and in collaboration with Froth Town, this limited release is available at Shelter and at select venues in WA in cans and keg.