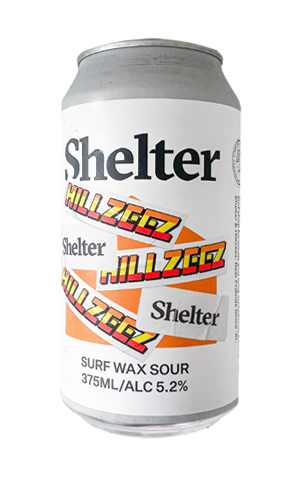 In the world of craft beer today, there are no limitations when it comes to inspiration and collaboration. Case in point: Shelter’s effort in cahoots with Hillzeez, the iconic South West surf, skate and streetwear retailer, with whom they've combined to create Surf Wax Sour.

Although, thankfully, no surf wax was harmed in the making of said beer, its flavour profile is inspired by the unmistakable coconut aroma of a freshly cracked box or tin of surf wax, aided in no small part by a hefty addition of coconut; those bold coconut characters complement ripe pineapple and citrus notes, which in turn lend themselves well to a moderate tartness and a tight, clean finish.

Surf Wax Sour might have been conceived with the help of one of the region's oldest and most recognisable brands, but Shelter, who hold the title as the region's youngest brewery (at time of writing), ensures a modern, tasty sour lurks within these tins.