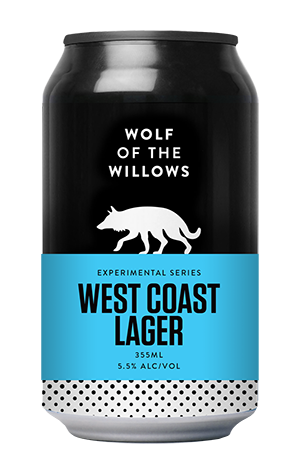 It’s often one of the first lessons someone wading into the wide world of beer learns but of course, the more you learn, the more complex that world becomes. Some ales can be fermented cold, some brewers use yeast gathered from their surroundings and some beers are made with marshmallows.*

Helping muddy the waters even further are Wolf of the Willows, Bintani and Fermentis and their experimental series where they aim to push brewing boundaries. West Coast Lager is a lager fermented warmer and higher than most in the style (a four-to-five day ferment at 18 degrees for those playing along at home) which is also heavily dry-hopped with the experimental New Zealand hop, NZH-107. America’s Centennial plays an assisting role too and all of that experimentation comes together for a beer that might look like a lager and be as crisp as they come but is a long way removed from one you'd expect to pick up in European beer hall. Instead, there’s quite an intensity to the beer’s fruit aroma that includes grapefruit, nectarine, lime, a touch of marmalade and a floral note that’s quite fragrant and slightly brings to mind a classic touch of diesel or warmth often associated with kiwi hops. In other words, it's lager, but not quite as you know it.

*Speaking of which, Wolf of the Willows' collaboration with Mork Hot Chocolate, The S’mores-Man from 2020 is back out.