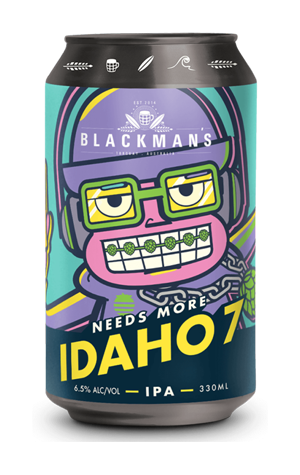 I still remember the first time. It was a limited release IPA from Cavalier showcasing nothing but Idaho 7 called, funnily enough, Idaho IPA, that was debuted at Good Beer Week almost five years ago to the day. The US hop variety might not have set the world alight like, say, Mosaic in the time since but I fully expect its presence to grow and featured it as the finishing hop in our Crafty Cabal relaunch beer, Disco Monks From Outer Space.

Here, it stars in Blackman's Needs More Series, with this IPA sitting closer in texture to the Amarillo entry earlier in the year than the more rounded Mosaic that followed. In other words, it delivers its citrus rind, something more floral, and a bit of peach – they’re going with Earl Grey tea as a descriptor on the labels – within a pretty tight and lean West Coast style affair. There's plenty of lingering, flavoursome, potent bitterness too, making for another fine entry to the series.