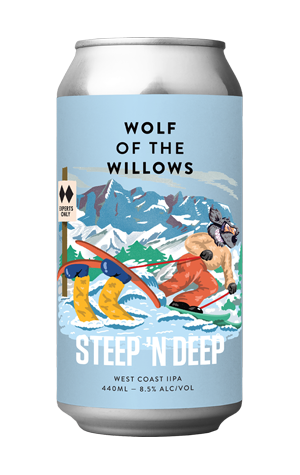 As hazies and NEIPAs continued to take over the world of IPA (and, to a growing extent, pale ales too), the clamour from those drinkers after the more traditional India pale ale† pleasures – those of a clear, lean and unencumbered form – only grew louder. And, while 2021 has proven to be its own peculiar sort of shitstorm after the relatively one-dimensional shitstorm of 2020, it does appear those people's prayers are being answered.

Joining the ranks of clearest of clear IPAs is Wolf of the Willows' Steep 'N Deep, and it's a clarity that allows you to watch the bubbles rise slowly – a warning there’s a density, and thus a fair amount of booze, at play. It has a pan-tropical fruits character, topped off with a splash of berry juice, in a manner that's not explosive but certainly broad, courtesy of an all-Kiwi lineup of Nelson Sauvin, Motueka, Kohatu and Nectaron hops.

Lean n mean of texture, thus allowing its wealth of fruit and pine flavours to pass like a wave over your palate unhindered by stickiness or flabbiness, the IIPA's bitterness feels barely present despite being described as lip puckering, which suggests they've judged things just right to maintain the sort of balance needed to avoid the fate of the skier on its label.

† When was the last time anyone wrote or said India pale ale in full, eh?