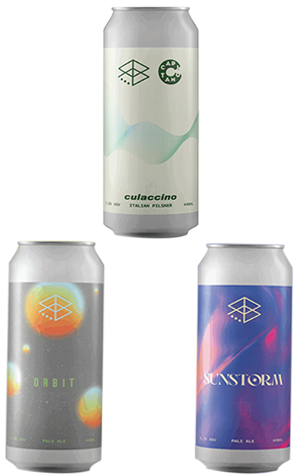 The latest trio of beers from Range Brewing, released on August 13, all might showcase hops in their own way but more than anything, they feel like beers that are destined to be drunk with the sun warming your skin. Culaccino (apparently pronounced Cool-uh-chino), is an Italian pilsner brewed from a distance with Range’s mates at Capitano, the Carlton Italian restaurant from the same team that run Bar Liberty. The idea is that the hoppy pilsner should be paired with the many tasty items on Capitano's menu, with it being dry-hopped with Mandarina Bavaria and Hallertau Blanc and pouring a cloudy and golden yellow. A mix of citrus and a herbal touch are immediately apparent from the aroma but on the palate, that general citrus moves a little closer to tangerine with a touch of white grape and a drying herbal quality that meets with the lager’s substantial bitterness to provide a rounded finish.

Orbit is the latest in the brewery’s ongoing experimentation with heavily hopped midstrength beers, with the 3.6 percent pale ale making use of Citra, Centennial and Motueka. On pouring it and seeing just how pale the golden straw beer is, you immediately know that it's a little lighter on the booze than many releases from the Brisbane brewery. But it's still a beer that's very much out of the Range textbook, having a soft mouthfeel, slight bitterness and being led by the hops which provide equal measures of orange, mandarin and tropical juice.

Finally, there’s Sunstorm, another pale ale which is this time 5.1 percent ABV and a similar hop bill to Orbit, with Citra, Motueka and Galaxy all used in the dry hop. Here it's a slightly different mix of fruits at play though, with passionfruit most apparent and joined by melon, white grape and a touch of lime zest. So while though they might all be beer for the sun, if the weather is a little cooler where you are or picnics unachievable then fear not. There's enough tropical notes and crushable qualities to help the trio transport you elsewhere.