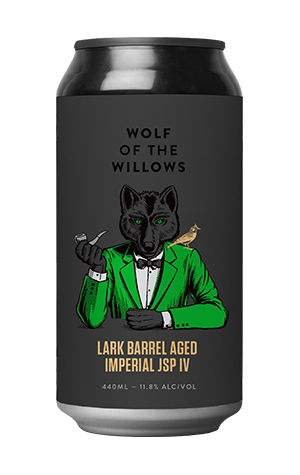 As those who have visited the Wolf of the Willows taproom in Mordialloc would know, the brewery is serious about barrels. But while the oak from Lark and other local operations that lines the back of the brewery may provide a visual cue, the partnership between spirit makers and Wolf goes back to before they even had a taproom of their own. The Barrel Exchange Project with Lark launched in 2018 and, while it has since expanded and brought in other distilleries, Wolf's partnership with Lark remains a significant yearly release.

You can read more about it here but, in essence, it involves the brewers and the Tassie distillers working closely together to pick barrels, while the Wolf team make an imperial version of their Johnny Smoked Porter, then let that beer sit in said barrels with the aim of releasing something that’s as much an expression of the barrels as it is the beer inside.

That's precisely what we've got with Lark Barrel Aged Imperial JSP IV too, where the rich, boozy beer is filled with a complex array of characters. You could likely spend the entire experience picking those apart but let's just say they include a distinct touch of truffle, berry and tobacco plus vanilla from the oak, along with a whisky-soaked mix of burnt sugar, molasses, peat and smoke that then passes onto the underlying stout flavours of dark chocolate and espresso.

Here's to many more years of collaborations!