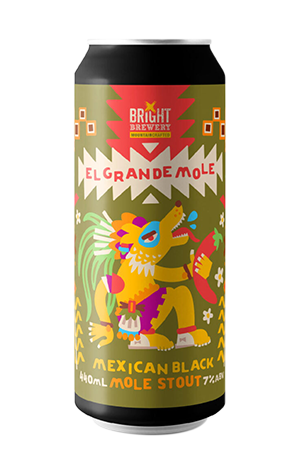 There are precious few ways to keep yourself entertained in lockdown but one method I’ve been enjoying is by giving my housemate’s a new release beer, telling them very little about it, then making note of their response. With Bright Brewery releasing a Mexican Black Mole Stout, it seemed like a perfect beer for such brilliant entertainment (if anyone has any streaming shows to recommend, I’ll take them) and the reactions were along the lines of:

“Look at how thick it pours, this is so rich.”

“Reminds me of Lindt chocolate with chillies but with extra spice.”

Considering the beer was brewed to mimic black mole sauce from Oaxaca in Mexico, and includes a mix of spices in cinnamon, clove and allspice along with raisins, the responses suggests it’s mission accomplished. It pours looking like a rich sauce and, fittingly, chocolaty and dark fruit flavours make sure their presence is felt quickly. Though there’s initially only a slight hit of chilli, that builds over time, while the spice mix presents a flavour that closely resembles cola without any of the sweetness.