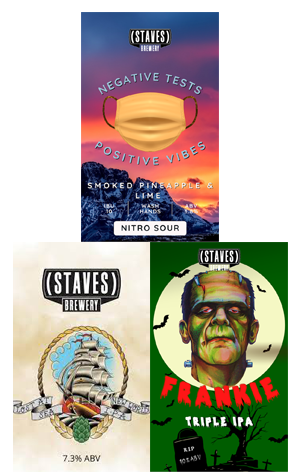 Expect a solid sour tang, with lime acidity cutting through the pineapple flavour. The smoke is only gentle, like the charred effect on a slice of fresh pineapple cooked on the barbecue. But the more you drink, the more the smoke aroma comes to the front. The nitro effect is quite light on, but you won’t find that to be an issue if you follow brewer Zac’s approach to pouring a nitro beer. It’s, uh… unorthodox, to say the least.

Staves refer to Lost At Sea as a New World IPA, which in my experience is becoming the new label for "West Coast IPA plus a bit of extra fruitiness". Apricot, grapefruit and caramel on the nose set up your expectations for a real fruitiness on the palate, but that first sip is a big fat mouthful of pine sap. I’m not saying the fruit isn’t there, but grapefruit and caramel and spice are far more prominent than the stonefruit in the aroma. And the pine. Oh, the pine. And the bitterness. Oh, the bitterness.

When it comes to Frankie, the second triple IPA Staves have ever made, he doesn’t even pretend to share any common ground with fruitier IPAs. He lifts you up in his strong caramel malt arms and gives you a resinous bear hug. It’s warm in his boozy embrace, and you can’t escape the smell of pine tree car air freshener he’s used as deodorant, but he’s cleaner than you might think a laboratory-created monstrosity would be.

Frankie may be 103 inches tall and weigh in at 103 IBUs, but for all his bitter heft he’s still something of a gentle giant.

If Mick can include links, we'll add one designed to lift moods too, courtesy of Gruff Rhys.