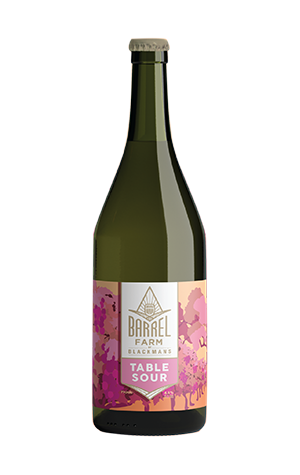 Travel back to March 2019 and how would you spend your time? Warn the world about COVID-19? What if nobody believed you? A better use of your time might be to just enjoy it, spend the afternoon enjoying the early autumn sun and breath in deep: you don’t need to worry about the particles in the air. Maybe head to a winery on Victoria’s Surf Coast, to enjoy a day picking chardonnay and pinot noir grapes with the crew at Blackman’s Brewery. Once those grapes are picked you can add them to a few ex-Scotchmans Hill wine barrels along with a malty red ale and let some wild yeast and bacteria. cover them

Then return to the present day of 2021 and not only would you find a very different world, but the beer would have had some changes too. The wild bacteria has been given more than two years to do its thing and in August, the brewery blended a kettle sour with the beer and let it referment before it was packaged in 750ml bottles and became the Table Sour before us today. The resulting beer is one that pours dark brown is quite vinous in the mould of an Oud Bruin from Belgium. But Table Beer isn’t as sour as many barrel-aged beers, instead presenting with a more herbal note in close proximity to an organic cola and a light touch of Brettanomyces-induced fruits that come to the fore as the beer warms. Should you have spent that afternoon warning the world? Nah, it would have been a nice afternoon.